From Chris Marblo, Head of School 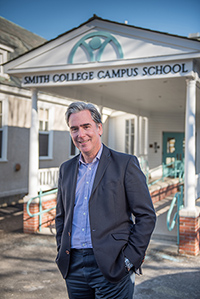 Earlier this week Peter Gray, a research professor at Boston College, gave an excellent talk at Smith about the importance of play. Gray’s overarching point is that play is indispensable to healthy child development and that over the past few decades the amount of play – and the nature of it – has changed, to the detriment of children.

In an interview in the American Journal of Play, Gray comments on what play is and why it is important. His ideas about play resonate well with ours at the Campus School and highlight why we treat play as a serious activity, one that must be preserved and defended in a culture that is increasingly seeking to disconnect it from childhood. I hope you find his ideas interesting and worthwhile:

AJP: As a child, did you learn by playing?

Gray: Yes. Like other kids at the time, I learned an enormous amount through play. In all of the communities I lived in (we moved a lot), you could go outdoors at almost any daylight time after school, on weekends, or all summer long and find kids playing and exploring, usually with no adults in sight. In such play, we discovered our passions and developed skills related to them, learned how to get along with one another despite our squabbles, learned how to solve our own problems, learned how to get out of the predicaments we got ourselves into, and learned how to control our emotions. These are all crucial lessons that can’t be taught in school or by other adult-directed means; they can only be learned through free, self-directed experience.

AJP: Obviously you believe kids today miss the types of experiences you enjoyed. Why do they, chiefly?

Gray: I do believe that. Since the 1950s, there has been a continuous decline in children’s freedom to play and explore away from adults. This is partly because of increased time in school and doing schoolwork at home, but it is also, even more, the result of adults taking greater control of children’s lives outside of school. Now kids are more likely to engage in formal, adult-directed sports than in pickup games, more likely to take karate classes than have snowball wars with other kids. Part of the reason for this is that parents now are afraid to let their kids play unsupervised. Whenever something awful happens to a child playing unsupervised anywhere in the developed world, the media dramatizes it and so-called experts use it as yet another opportunity to worry parents about the dangers of freedom for kids.

AJP: Is such worry unfounded?

Gray: No, not unfounded; I must admit there have been some real changes in neighborhoods that may in fact make free play less safe than  it once was. Parents—especially mothers, but also fathers—are no longer home as much as they once were, so there is no one glancing out of windows ready to help if something does go wrong. Adults don’t know their neighbors as they once did, which leads to a decline in a sense of neighborhood and thereby also to a decline in real safety as well as perceived safety. Even the decline in birth rate plays a role; in most neighborhoods there are fewer kids to play with than there were in the past. When there are fewer kids outdoors, for whatever reason, the outdoors becomes less safe—as well as less attractive—for any individual kid. There is safety in numbers.

But another part of the social change is this, which I think may be the most significant part. We have for various reasons, mostly related to the increased weight of formal schooling, come to think of childhood as a time for résumé building; and play does not fit on a résumé. Parents are motivated to get their kids into the best colleges possible; and they have become convinced, rightly or wrongly, that formal extracurricular activities, adult-directed volunteer activities, and good grades in school, not play, are the route to doing that. They think it’s important to get kids onto this sort of track even when they are still little.

AJP: You said earlier that by your definition, adult-directed activities are not fully play. How do you define play?

Gray: Play, as I define it and as many other play theorists tend to define it, is, first and foremost, self-chosen and self-directed.  Players choose freely whether or not to play, make and change the rules as they go along, and are always free to quit. Second, play is intrinsically motivated; that is, it is done for its own sake, not for external rewards such as trophies, improved résumés, or praise from parents or other adults. Third, play is guided by mental rules (which provide structure to the activity), but the rules always leave room for creativity. Fourth, play is imaginative; that is, it is seen by the players as in some sense not real, separate from the serious world. And last, play is conducted in an alert, active, but relatively unstressed frame of mind.

Gray: Yes. Children generally lose motivation when they lose choice—when adults are in charge—and so they don’t learn such primary lessons as how to structure their own activities, solve their own problems, and take charge of their own lives.